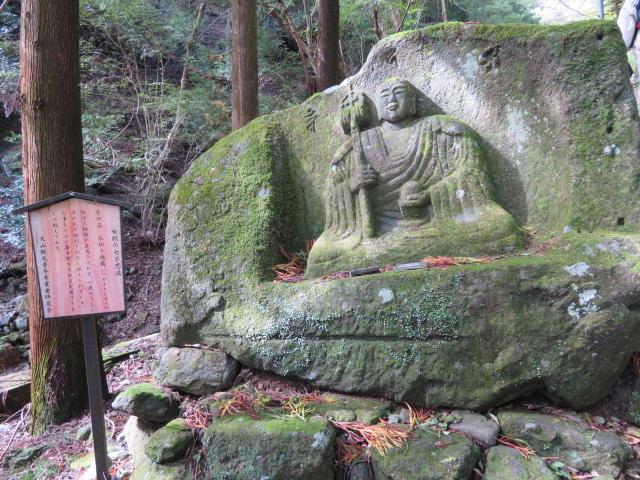 Mt Oyama pilgrimage an entertaining way to step back in time

In our modern times, Mt Oyama (1,252 meters) in the Tanzawa mountains of Kanagawa Prefecture makes for a pleasant excursion from Tokyo or Yokohama, but historically Oyama was a site of religious pilgrimage particularly popular with Edoites (modern Tokyo was known as Edo before the mid-19th century).

I recently joined a great tour that combined these two for a fun day trip. Details on a similar historic adventure in Oita Prefecture on Nov 30 by the same tour company appear at the end of this article. Don't miss it!

The "NOBODY KNOWS" tour began at a Tougakubou, a shukubo inn at the foot of the mountain. Shukubo are inns that specifically serve the needs of religious pilgrims. As we donned our gyo-i (a kind of happi worn by pilgrims), the guide explained that Oyama has been a sacred site for at least 4,000 years, although the mountain's Shinto shrine, Oyama Afuri Shrine, dates back to the 10th emperor (ie, approximately 2,000 years ago) and its affiliated Buddhist temple, Oyama-dera Temple, was founded by a priest named Roben in 755.

We were then told how during the Edo Period (1603-1868), merchant associations, guilds and neighborhoods of Edo would send representative groups to worship on the mountain at least once a year. Travel in those days was highly restricted by the shogunate. Traveling all the way to Mt Fuji, Japan's ultimate religious mountain, required special travel permits, while Mt Oyama was designated as a "short trip" for which permission was not required. Consequently, Mt Oyama became a popular substitute pilgrimage among Edoites. Needless to say, even with the goal of religious pilgrimage, traveling as a group meant there was plenty of lively fun, too. Our tour was designed to emulate the entire experience.

We began with a blessing in the shrine room on the inn, a Shinto priest offering prayers for our safe ascent and return. Each of us was given a small wooden "sword" on which to write our particular prayer for the journey while one of the guides carried a large wooden sword (about a meter long) representing prayers on behalf of all of us. This, too, emulated the Edo Period experience, when groups came to the mountain as representatives of their friends, neighbors, or colleagues, and so carried their prayers, as well.

Our first stop was the Roben Waterfall, a thin stream of water dropping nearly four meters from the mouth of a dragon and then flowing into the Oyama River that forms threads through this community. Traditional pilgrims bathed in one of several similar falls in this area before beginning their ascent. Roben himself is said to have used this one, hence the name. These days, visitors can only look, but not enter the water.

Next we passed by a number of shukubo inns and tofu restaurants on Tofu-zaka, a long slow incline. Because of plentiful pure water, this area is particularly known for its excellent tofu. We are promised a tofu meal upon our return.

Just across the Oyama River is the start of Koma Sando, regarded as the initial approach to mountain. Pilgrims ascend 362 steps, lined with shops and restaurants, to reach the trailhead (and the cable car station for those not wishing to proceed on foot). It takes about 15 minutes to traverse the Koma Sando, more if you stop for a snack or to admire the wares. Koma means spinning top, a popular Japanese wooden toy that is made and sold in this area. In the Edo Period the spinning of a koma was seen as an analogy for money circulating -- something desired by merchants -- making these koma a popular talisman among the merchant class.

Fortunately, the 362 steps are broken by 27 landings. Tiles depicting tops connote which landing one is on. There is a signboard explaining the "code." Trivia questions are posted in Japanese on some stairs, taunting that the answer is just a little further on. Finally, a sign informs pilgrims that they have reached the top step.

But this is by no means the end of the journey.

From here one must choose whether to walk or ride the cable car. Our group chose to continue on foot, up more stairs to a small shrine from whence the trail divides into the "otoko slope" (steeper and more arduous) and the "onna slope". We went for the "onna slope", resulting in a 40-minute climb to Oyama-dera. Along the way, we could enjoy lush woodland and a burbling stream. We also spotted four deer grazing on the hillside above us. Our guide explained that deer and wild boar were common in the area, and recently bears had also been sighted.

Along the trail were signs explaining seven "mysteries" including a spring of pure water associated with Kobo Daishi (774-835), the great Buddhist evangelist who travelled the length and breadth of Japan, and a jizo relief in stone said to have been carved by Kobo Daishi using his fingernails.

When we reached Oyama-dera we were greeted by another long steep staircase, divided by stone lanterns and lined with small bronze statues of Fudo Myo-o, a Buddhist guardian deity. The guide explained that the maple trees growing in this area were brought in from the Kyoto area. In the late fall they turn a spectacular red, a sight that draws huge crowds.

The temple at the top of the stairs boasts a spectacular view of Enoshima, Sagami Bay and the Miura Peninsula beyond. The temple itself is covered with intricate wood carvings and houses three 13th century Buddhist images cast, unusually, in iron.

After enjoying the view and learning a bit more about this historic temple, our guides gave us a break by leading us to the cable car stop so that we could ride the rest of the way to our final destination, Afuri Oyama Shrine.

Here we were met by a Shinto priest who told us more about the shrine's history and practices, while leading us up a last flight of stairs and into a small worship hall. We placed the small wooden swords inscribed with our prayers onto a special table between our seating and the inner sanctuary of the shrine. The priest performed a small ceremony to send our prayers to the gods and concluded by waving his purifying white pom-pom over our bowed heads. Next, two local boys performed a kagura dance for us. The priest explained that kagura means "entertaining the gods", but we are also entertained by this rare and special spectacle.

After the ceremony we had time to explore the shrine grounds before catching the return cable car. One feature we were advised not to miss is the spring underneath the main shrine, where we filled our water bottles with the shrine's sacred water.

And, of course, having gained higher elevation, there is also the view. Michelin has awarded two stars to this expansive view, which now includes not only Enoshima, Sagami Bay and the Miura Peninsula, but also extends all the way to Tokyo Bay and the Boso Peninsula.

We made our descent on the cable car and then back down the stairs of the Koma Sando to regroup at Tougakubou for a sumptuous lunch featuring the local tofu fixed in a variety of ways. In keeping with the theme of emulating Edo Period pilgrims, we were entertained throughout our meal by traditional entertainers including acrobats, musicians and dancers, as well as by a few audience participation games that were, apparently, popular in those times.

The explanations and entertainment provided by the tour made this a much deeper experience than merely ascending the mountain would have been. It was easy to see why Edo people were so eager to make these religious pilgrimages with their additional entertainment and conviviality, and I felt like I had become one of them.

NOBODY KNOWS trip to Kunisaki Peninsula in Oita

On Saturday Nov 30, NOBODY KNOWS is offering a day trip on the mystical Kunisaki Peninsula in Oita Prefecture. Departing just after lunch from JR Usa station or the Bungotakada bus terminal and finishing at 9 p.m., the guided tour with English interpretation includes climbing 100 stone steps to see the Kumano Magaibutsu, a Buddha image carved into living rock; a visit to thousand-year-old Fukiji Temple, the oldest wooden structure in Kyushu; seeing Tashibunosho, a swathe of myriad rice paddies in cultivation for over a thousand years; and attending the Shujo Onie fire festival and special additional Kyogen comedy and musical performances, as well as good local food and sake.

For details or to secure your place at this rare and special opportunity, contact: [email protected] or book online in English https://nobodyknows.tours/bungotakada1130 (for just the Shujo Onie fire festival experience).

For the entire bus tour:  https://www.confetti-web.com/tabi/tour_list.php?t_id=62&

Vicki L Beyer is a freelance travel writer who regularly contributes to RikiWeb and also blogs about experiencing Japan. Follow her blog at jigsaw-japan.com.

List of Canceled Events in Japan Due to the Coronavirus