Driver on Seibu Railway train falls asleep while at controls

Seibu Railway Co said that a male driver in his 20s fell asleep while operating a train on Tuesday.

At the time, nearly 700 passengers were on board the train, Sankei Shimbun reported. No delays or overruns occurred at any stations, the rail operator said.

According to Seibu Railway, the driver dozed on and off for about 15 minutes while operating a semi-express train. A passenger reported seeing the driver snoozing at the train’s controls to a station attendant at Ikebukuro Station in Tokyo. However, the driver continued to operate the train until a replacement was arranged.

The Saitama-based railway company said in a statement: “We will firmly instruct our crew of the tremendous responsibility to take accountability for our passengers’ lives.”

How were they able to stop the train? Do they have automatic/remote stopping systems in place?

Driver fatigue is a factor in most train crashes all over the world. So many people were killed in the heyday of American trains that they instituted reforms and severe sanctions regarding time on-the-clock and mandatory rest time before the next duty shift. Now train engineers (drivers) will stop their trains in the middle of a route if they exceed their shift, and the railway must find a way to get replacement engineers out to the engines.

It is still a reported problem for the most junior personnel, as train crews are "called" based on seniority. A young man in his 20's like this one would get the late shift, and would be called again eight hours later, and expected to have accomplished all life tasks (bathing, eating, sleeping, uniform laundering) in that short time period. It may be similar in Japan - the young man finished a shift on the last train at 1 a.m., and then was expected to drive again on the first train at 5 a.m. One of the J-TV shows recently took the TV cameras into a resting room for the drivers, located at the train yard, so they would not have to return all the way to their homes when facing a short turnaround.

"Dozing on and off for 15 minutes"... Don't the trains have control systems in place, rather than relying on passengers reporting it?

Most Japanese people I know are always tired at work; because they stay up until 1am watching brain-dead TV.

Sleeping drivers, combined with corona spreading.... they really send you on a suicide command, if you are forced to use public transportation.

Bungle... Yes there is a "dead mans handle" on the train. It has to be pushed while in motion or the train will stop. As in if the driver dies.. the train stops, hence the name.

What happened in this case was that the driver didn't fall asleep, the train did not stop. However, the yawning, eye rolling driver was reported to authorities.

However, the driver continued to operate the train until a replacement was arranged.

Criminal negligence! Heads should roll for this.

Most people don't know but the trains run actually very well on their own in japan without even the driver there. There is a secure sytem operating the train. Most of the time drivers are there to watch out for emergencies and just in case if something is wrong. So while is defnitely not allow to fall asleep on the job while being in charge of so many lives, people shouldn't panic that something worse would have happen in that 15 minutes. Unless some natural disaster struck, going without power or something at the tracks etc. Those are the moments where the driver comes in and take control of the train.

Deep bows from the upper oyajis and severe punishment and "retraining" to atone for his error for the driver.

Driver on Seibu Railway train falls asleep while at controls

However, the driver continued to operate the train until a replacement was arranged.

Wait... Whut?!? I hope that an attendant was at least with him until the replacement arrived!

The Saitama-based railway company said in a statement: “We will firmly instruct our crew of the tremendous responsibility to take accountability for our passengers’ lives.”

Why does that sound so insincere? I have to believe that there is more to that statement than the article is sharing.

I suppose on the bright side - no one got injured or killed as a result of this.

A passenger reported seeing the driver snoozing at the train’s controls to a station attendant at Ikebukuro Station in Tokyo. However, the driver continued to operate the train until a replacement was arranged.

So you are still acknowledging that there are circumstances in which the driver needs to be awake. It does not matter how rare these circumstances might be. The Seibu employees involved in this incident allowed this driver to continue to operate the train knowing he was not in a fit state to do so safely and putting the lives of potentially hundreds of people at risk. That should be instant dismissal for all involved.

This will be the problem with self-driving cars, ships and aircraft too. When the driver is only there for observation and emergencies, with fail/safe AI computers that in reality do not have all the answers, then how to stay fully awake will be a serious problem.

Of course there is. The article says "while at the controls", not "while driving". So he took a snooze while the train was standing at the station, where somebody saw it.

The story is much less dramatic than the article makes it sound like. 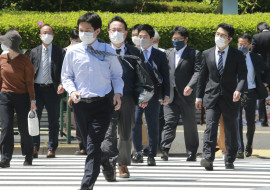 6 Ways To Find Furniture for Your Japanese Apartment

This Week: At Home And Around Tokyo For April 12-18